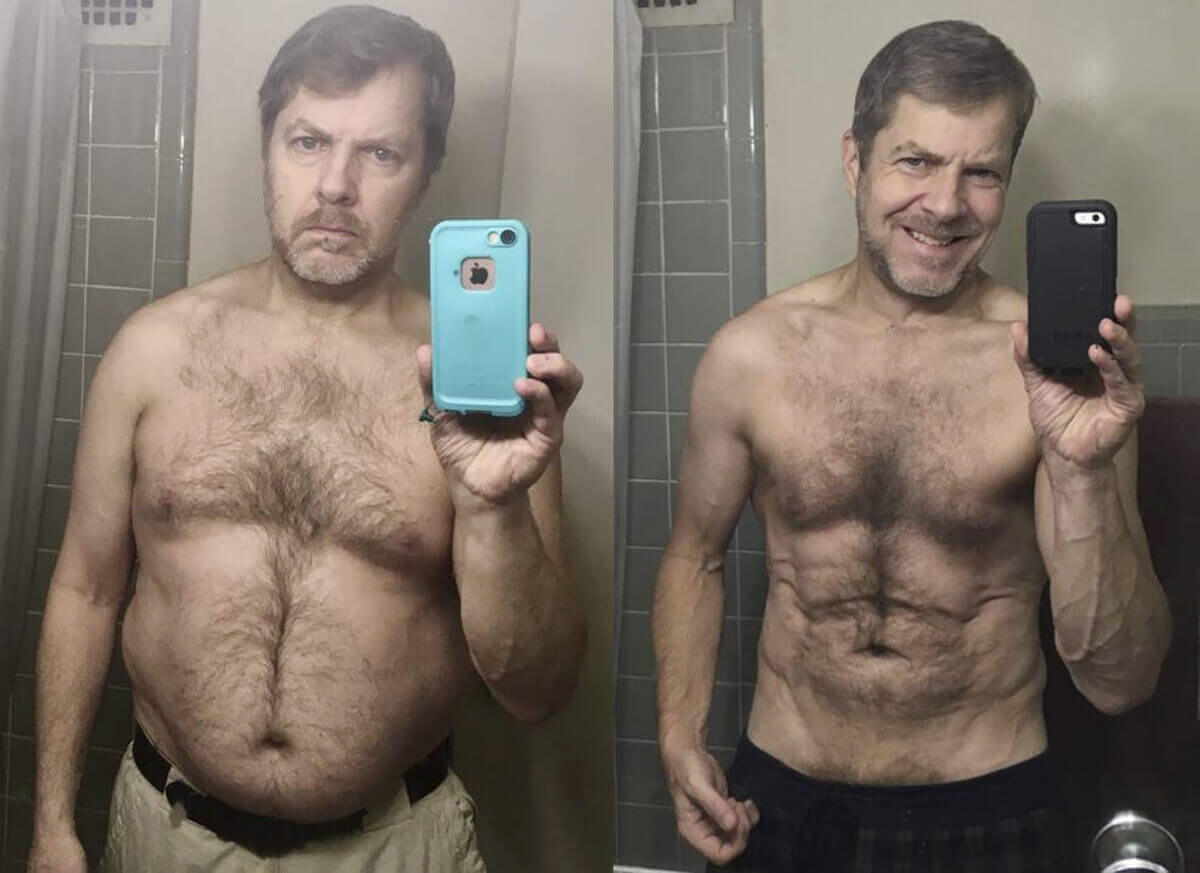 Will's before and after photos. He lost 40lbs of fat and gained 5lb of muscle.

About Will. Before His Intermittent Fasting for Weight Loss Journey.

Will is a former US Champion in squash. Professional squash is the toughest cardiovascular sport played with a ball in the world (soccer, which many think would be the toughest, is number three; water polo is second), and Will was known for being the fittest player in the US. He played on the international pro tour for several years until a series of injuries derailed his career. He could no longer train the way he wanted, and, inevitably, he became more sedentary.

Recently, he had been playing with a bad knee, but as it continued to deteriorate, he found himself avoiding training and playing less. His conditioning deteriorated, and he began gaining weight. The time had come. If he wanted to shed his excess 30+ pounds and get back in shape, Will knew he had to bite the bullet and have knee-replacement surgery, the 11th squash-related surgery of his career. At his pre-surgery check-up, the doctor found that he had a vitamin D deficiency and a dangerously high level of cholesterol.
“It got worse. Three days after the surgery, my mother unexpectedly died, and I fell into a funk. Normally I use exercise to deal with extreme emotions, and being unable to do anything but lie around, I tried to cope by watching Netflix and ordering pizza. I packed on another ten pounds. That’s when I took the BEFORE picture above.”

As a pro athlete, Will knew that surgery was just the beginning of his recovery journey. He needed the right physical therapy to break up scar tissue and most importantly he needed to build back healthy habits. Like, going every day to the gym, even if just for 5 minutes! He found that even a short session kept him eager to go back the next day and motivated him to pack more in his workout. It took him 3 weeks to build the habit, day by day, and eventually he reached two hours and a half of intense exercise. He knew he was on the right track not only to athletic performance but also to being fit and shredded. Will wanted to have a strong cardiovascular system, he wanted to lose body fat and he aimed for six pack abs.

A six-pack is not necessary to compete in squash, but it makes me feel good. If you feel good about yourself you are going to compete better, if not it is hard to withstand the pressure, you start doubting yourself …

The next question was the right diet to support his journey. Will tried something that was “a bit of a fad” to burn off fat – intermittent fasting for weight loss. He started consuming all his meals in the 10 hour period between 9am and 7pm, and did not worry about what he was eating.

Three weeks of not eating anything after 7 pm was so hard. I really liked having a snack at 10 or 11 pm, and it was surprisingly hard — brutally hard — to conquer those cravings.

But after keeping it up for three weeks, it got easier. Conquering cravings, he used three-week increments to reduce his meal window down to 8 hours, cutting one hour at each end, then to 6 hours, again with no restriction on the food itself.

Will started browsing all meal prep services to compare their offerings, and he found it very difficult to find a weight loss meal prep company one that offered the substantial amount of quality protein that he was looking for, at least 60g – 80g per meal. MealPro’s a-la-carte extra protein portions in their a-la-carte menu came very close, just add a protein bar and that does the trick. On top of that, MealPro offered a broad selection of healthy option. He tried many meals but fell in love with the chicken, the salmon, and the beef lasagna.

It wasn’t just like getting protein at the expense of taste and having a bunch of filler ingredients. They are cooking it fresh and shipping it out. When you want to create a habit, you need to make sure you enjoy what you are eating. My favorite is the chicken tenders: healthy, not fried and the mashed potato and corn feels like an indulgence meal but it’s healthy. It was as easy as eating one MealPro meal per day. I order 18 meals every 21 days.

Will has one MealPro meal per day, usually between 12pm and 2pm. He has one cheat day per week, when he indulges and does not feel bad about it. If he knows he will be with friends say on Saturday, he will make that his cheat day.
He does not microwave his meals but prefers to heat them up in his convection oven. He puts the meal on an aluminum foil and drizzles some olive oil over it to keep it moist in the inside and get it crispy outside, then bakes it in the oven at 350F for 30 min.

The chicken tenders tend to get crispier if you place them directly on the metal pan. I put red pepper flakes on the Italian dishes for extra kick, otherwise MealPro entrees taste great right just the way they are.

In addition to intermittent fasting for weight loss Will exercises regularly. Will does all his workouts fasted, but drinks lots of water during the day to not get dehydrated. Will works out at the beginning or end of the day. Because he has a full-time job, he gets to the gym super early in the morning 6 days a week, has his meal between 1pm and 2pm, and goes back to play squash until the gym closes 3 or 4 nights per week. On Monday, Wednesday, Friday, and Saturday mornings, Will lefts weights. Monday and Friday are pull workouts for back, biceps, and hamstrings; Wednesday and Saturday are push workouts for chest, shoulder training, calves and quads. He follows all these workouts with 30 minutes of solo hitting on the squash court.

I always want to hit a few balls after lifting weights; it doesn’t feel great, but when I practice stroke production under extreme muscle fatigue, I find it much easier to keep my strokes grooved when rested.

On Tuesdays, Thursdays, and Saturdays, Will does sprints in the morning. He does them on the elliptical machine to protect his knees. 30-second repeats with one-minute rest between them.

“The sprints are god-awful, and Saturdays are brutal because it’s a double day; I do the sprints after a full weight workout. It sucks; I usually get lightheaded during the sprints, and I’ve even barfed a couple of times!”

Will’s Results After Intermittent Fasting for Weight Loss and Training

Will lost 40lbs of fat, while packing on an additional 5lb of muscle thanks to intermittent fasting for weight loss and his protein rich and vitamin rich MealPro meal plan. And best of all, a couple of months after his surgery his new medical tests proved him right: his heart was strong, with low rate and low blood pressure, the vitamin D deficiency was gone, bad cholesterol was low and good cholesterol was way above the normal range!

My blood panel showed incredible results and I am not doing anything crazy. It was as easy as eating one MealPro meal per day six days a week. It’s rarely been so much fun going to the doctor.

Start slow and build the habit! The first thing Will did was the hardest: get yourself in a groove.

It almost snowballs on itself … for me 3 weeks is the magic number for creating the habit. If I can do something for 3 weeks I am in the groove.

With a personal mission to change the narrative of how we view food, farming, and health in the US. Andy is deeply rooted in wholesome, natural foods as the foundation to great nutrition. 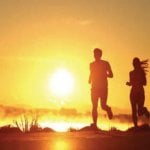 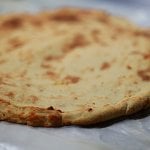 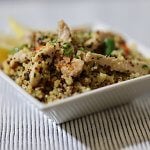 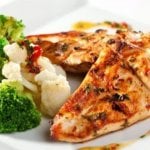