What are the benefits of eating breakfast? The meal is often described as the most important meal of the day, and rightfully so — it not only provides important daily nutrients such as protein, fiber, calcium and carbohydrates, but it also helps improve school performance, allowing students to do better on tests, according to the Food and Nutrition Service. If you feel tired or have difficulty concentrating during the day, consider adding breakfast to your routine.

Improved Grades
Eating breakfast can improve cognitive performance, test scores and achievement scores in students, especially in younger children. According to a study published in the journal “Archives of Pediatrics and Adolescent Medicine,” students who increased their participation in school breakfast programs had significantly higher math scores than students who skipped or rarely ate breakfast. As an added benefit, the group of students who increased breakfast participation also had decreased rates of tardiness and absences.

Weight Maintenance
Eating breakfast regularly may also help students maintain a healthy weight. According to a study published in “Public Health Nutrition,” children who skipped breakfast in the morning were more likely to overeat and have a lower overall diet quality than children who ate breakfast every day. This led to increased body mass index, or BMI, measurements.

Considerations
While eating any breakfast is better than skipping breakfast altogether, some choices are better than others. Carbohydrate-only breakfasts, such as bagels and toast, can give energy for one to two hours, while complete breakfasts that contain a balance of protein, fat and carbohydrates can keep blood sugar levels steady for hours, according to MealsMatter.org. Try some toast with peanut butter and a piece of fruit or cereal with milk and glass of 100 percent fruit juice. If you have time, make an omelet with cheese, broccoli and some turkey bacon.

To summarize, eating breakfast has many benefits for all age groups. To learn more about breakfast foods ready this post about the best types of foods to eat for breakfast. References:

What is reverse dieting? Can it help keep weight off?

Is Brown Rice or White Rice Better For You? 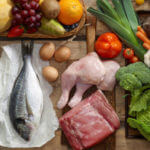